Working on an idea for my next painting.  The painting will be part of my series that is about moments of being invisible yet hyper-visible under the critical gaze of others within a fat phobic American culture. My next project depicts me riding a bike.  I have been watching Le Tour de France and Tour of California AMGEN bicycle race and these sports events have inspired my new painting.  I like to ride bikes. I remember a time when I was a child and I ask for a bike for christmas.  I got a bike that year.  I was so excited and proud to have it. I rode my new bike to school.  I was laughed at by my classmates. They said I was too fat and that I was going to pop the tires.  I was so embarrassed! I gave up riding my bike.  As an adult, I still like to ride a bike.  I mostly ride a stationary bike because I feel self-conscious to ride a bike in public places.

The subject matter is me riding in a bike race within a park like setting.    The composition will be designed to look like, A Sunday on La Grande Jatte, painted 1884 by Georges Seurat.  The late 19th century painting expresses the fun and leisure of Parisian life.  The content of the painting will be my  21st century version of living an imagined life of fun and leisure,  where size doesn’t matter.  Source material is from an InterNet search on bike races, from art history, and from personal family photo archives. 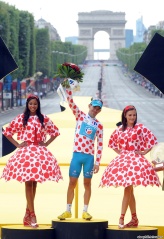 2 thoughts on “Idea For Next Painting”